Why do I need a full tank of gas in case of a power outage?

We are based in San Diego - land of sunshine and happiness. Earthquakes are a fact of life, but who worries when it is always 72 degrees and sunny - right?

Well we learned our lesson during the Great Blackout of 2011! On Thursday, September 8, 2011, we experienced the largest power failure in California history. 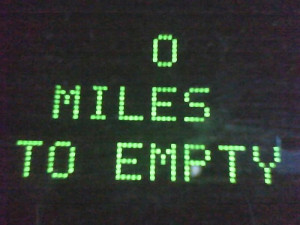 Streets were gridlocked because traffic signals, and many cars stalled out being out of fuel (modern gas station pumps require electricity to pump.) Even if Station owners wanted to collect cash or give away their gas - the pumps just weren't working. People were stranded everywhere. The sight of distressed drivers on the roadways was commonplace.

Worse, the San Diego Trolley system was shut down as there was no power to operate signal lights and related functions. Freeways in the Southern California megalopolis experienced extreme clogging, especially on the I-15 and I-5 corridors between southeastern Greater Los Angeles and the San Diego area's North County.

We even had a hospital without power for two hours when its backup generator failed.

Besides all the other tips we offer for power outage preparedness, remember this. Never let your gas tank drop below 1/2 full.

This, the fourth week of National Preparedness Month is about focusing on preparedness for blackouts, brownouts, and power outages. Here are some other great tips and articles: