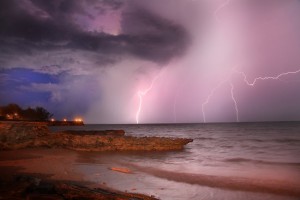 A 20-year-old man died Sunday after lightning struck 13 people at a popular Los Angeles beach and a golfer on Catalina Island during rare summer thunderstorms that swept through Southern California, authorities said. According to 10 News and the Associated Press: Thunderstorms are quite rare in Southern California, but people living there got a stark reminder Sunday of how ferocious they can be. Lightning struck 13 people at a popular beach in Los Angeles and another man golfing on Catalina Island, leaving two critically injured. Thirteen people, including a 15-year-old boy were jolted by lightning on the beach, in the water and on the famed Venice Beach boardwalk. Nine were taken to hospitals, where one remained in critical condition, authorities said. Other fire officials said most of those taken to hospitals were mainly shaken up and were expected to recover. Some appear to have been in the water and others on the beach's famed boardwalk. . On Santa Catalina Island, often called Catalina Island, off the coast, a 57-year-old man was struck by lightning on a golf course and was hospitalized in stable condition. That's according to Steve Denning, a law enforcement technician with the Los Angeles County Sheriff's Department. He did not have other details. The lightning strikes occurred as a fierce but brief thunderstorm hit the island, causing minor flooding and setting two small fires in the brushy backcountry that were quickly doused, Denning said. Parts of the island received more than three-quarters of an inch of rain in about two hours, said Stuart Seto, a weather specialist with the National Weather Service in Oxnard. A moisture-laden monsoonal flow usually spawns thunderstorms when it hits hot weather in the deserts and sometimes in the mountains this time of year, Seto said. The unusual weather came from monsoon moisture that brought a line of brief but strong afternoon thunderstorms to the region. Are you Lightning Safe? Are you Ready?
Categories: General Safety Topics & Disaster & Survival Forum
Tags: #LightningSafety, Lightning & lightning strikes
Posted By: First Aid Mart Team