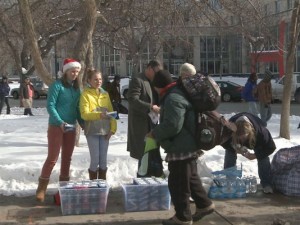 This awesome holiday story tells the tale of an altruistic teenager and her efforts in the snowy city of Denver. Teen delivers first-aid kits to homeless: Jamie Henry decided to make a difference. A student from Heritage High School in Littleton, Colorado  spent some time Friday afternoon spreading holiday cheer. After realizing how many less-fortunate people were in need of basic first-aid items. She created a non-profit organization called "Helping Hands First Aid." It became an official non-profit in September. Jamie handed out 150 first-aid kits to Denver's homeless population on Friday. Each kit has chapstick, some hand warmers, some Band Aids, medical tape and a candy cane for the holidays. "It fills my heart with happiness just to be able to do this for people," Jamie said. Read more @ NBC and If you're interested in donating or volunteering for this non-profit - go to http://helpinghandsfirstaid.org/.
Categories: Child Safety & Info News
Tags: giving, holiday & teens
Posted By: First Aid Mart Team