Search
Recent Posts
Recent Comments
Archives
Categories
It is tragically ironic that just as images of Bats are appearing everywhere for Halloween, the first death by Ebola in the US occurred.

The first person diagnosed with Ebola in the United States, Thomas Eric Duncan, died Wednesday morning, October 8, 2014 according to the Dallas hospital where he was being treated.

Bats are the likely hosts of Ebola Hemorrhagic Fever. Ebola is not spread through the air or by water, or in general, by food. However, in Africa, Ebola may be spread as a result of handling bushmeat (wild animals hunted for food) and contact with infected bats. There is no evidence that mosquitos or other insects can transmit Ebola virus. Only mammals (for example, humans, bats, monkeys, and apes) have shown the ability to become infected with and spread Ebola virus.

The 2014 Ebola epidemic is the largest in history This outbreak is affecting multiple countries in West Africa, and CDC has confirmed the first travel-associated case of Ebola to be diagnosed in the United States. About half the people who have gotten Ebola in this outbreak have died. Although the risk of Ebola spreading in the United States is very low, CDC and its partners are taking actions to prevent this from happening. A person infected with Ebola can’t spread the disease until symptoms appear The time from exposure to when signs or symptoms of the disease appear (the incubation period) is 2 to 21 days, but the average time is 8 to 10 days. Signs of Ebola include fever (higher than 101.5°F) and symptoms like severe headache, muscle pain, vomiting, diarrhea, stomach pain, or unexplained bleeding or bruising. Ebola is spread through direct contact with blood and body fluids When an infection does occur in humans, the virus can be spread in several ways to others. Ebola is spread through direct contact (through broken skin or mucous membranes in, for example, the eyes, nose, or mouth) with Ebola is not spread through the air, water, or food.

We recognize that even a single case of Ebola in the United States seems threatening, but the simple truth is that we do know how to stop the spread of Ebola between people —Beth Bell, MD, MPH, Director of the National Center for Emerging and Zoonotic Infectious Diseases

Protect yourself against Ebola There is no FDA-approved vaccine available for Ebola. Experimental vaccines and treatments for Ebola are under development, but they have not yet been fully tested for safety or effectiveness. To protect yourself from Ebola: Read more about Ebola HF: 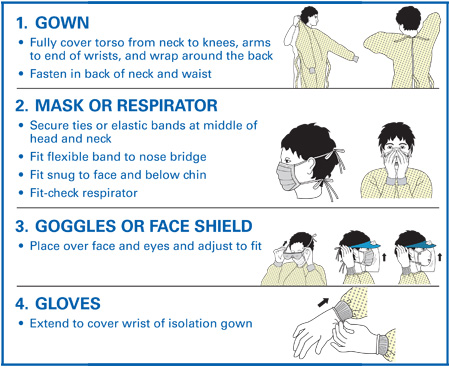 Sequence for Putting On and Removing Personal Protective Equipment (PPE) What to do if you are exposed to Ebola If you have traveled to an area with an Ebola outbreak or had close contact with a person sick with Ebola, you may be at risk if you Health advisory for airline travelers You should check for signs and symptoms of Ebola for 21 days If you get sick after you come back from an area with an Ebola outbreak 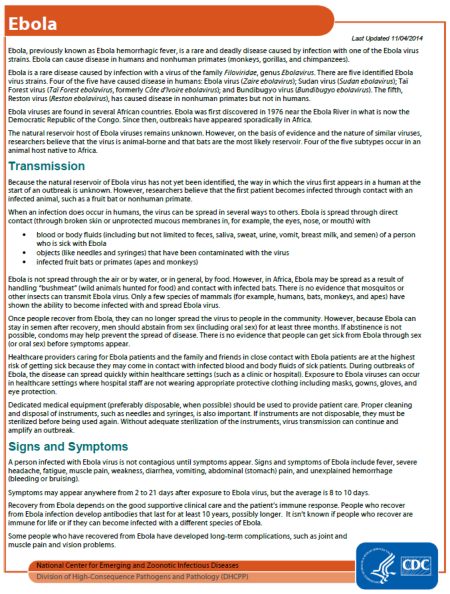