OSHA & ANSI - THEIR DIFFERENTIATIONS AND CONTRIBUTIONS TO QUALITY AND SAFETY STANDARDS: 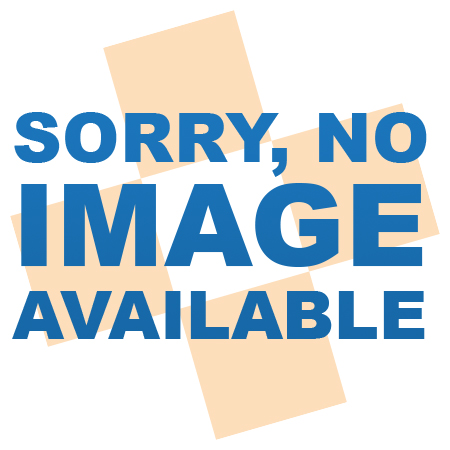 Plus - How this affects your business first aid compliance with standards and regulations including ANSI Z308.1, OSHA/CFRs 1910 & 1926

When it comes to workplaces and the employees within them, safety always comes first. 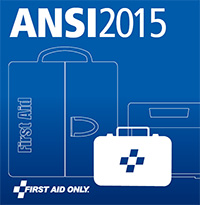 Knowing what supplies to provide to ensure the safety of the staff can be intimidating and confusing. As such, it is often easiest to follow the guidance of others – which leads countless persons to ANSI, as they set the standards for many industries and update the guidelines almost regularly. But what exactly does ANSI do and how is compliance with them regulated? Are ANSI standards compliant with OSHA regulations? How does one know if they are meeting the newest ANSI standards?  While all of this can seem complicated initially, breaking down the “ins-and-outs” without the often misconstrued legal jargon makes it quite simple to follow.

To start, what is ANSI?

The American National Standards Institute (ANSI) is, metaphorically, a private body of legislators and politicians in the world of quality and safety standards. This group is made up of nearly 1,000 persons from all areas within various industries, from manufacturers to consumers. A standard set forth by ANSI, as defined in ISO/IEC Guide 2:2004, is “a document, established by consensus that provides rules, guidelines or characteristics for activities or their results”. These standards are voluntary, unless made into law by OSHA, and can set specific requirements for items (such as size, shape, or process), mandate product or personnel performance, or define terms to leave no room for misunderstanding. To assure standards are current and being appropriately fulfilled amongst industries, conformity assessments are conducted. While ANSI doesn’t handle these assessments themselves, they accredit third parties that do so.

Next, do ANSI standards comply with OSHA regulations?

These standards, even when published or while being assessed, are not required by law – unless OSHA intervenes. The Occupational Safety & Health Administration (OSHA), a subset of the Department of Labor, is (also metaphorically) the police or law enforcers of quality and safety regulations. These regulations can be devised of and/or include standards adopted by ANSI, or can simply require adherence to referenced ANSI guidelines. Unlike ANSI standards, OSHA regulations are mandatory and one can be cited for hazards should the requirements not be met properly.  In fact, both business owners and managers can be held financially or even criminally liable for violation of OSHA regulations. At present, there are several OSHA regulations – and interpretations of such – based upon the 1998 and 2003 ANSI standards, implying that the most current standards should be followed. As such, OSHA still holds the ability to issue citations if the most current ANSI standards aren’t being met, even though they are not being directly addressed within their published regulations.

Finally, how might one determine if they are up-to-date with ANSI and their guidelines?

The most recent update to ANSI first aid kit standards (Z308.1-2015) was set forth on June 17th, 2015, which go into effect a year later – June 17th, 2016. Within the new standards, the content of the first aid kit prevails in importance over the style in which it is packaged. In previous standards, unitized boxes with color coding were required; after, bulk-style packaging was accepted. The new standards allow for either, but set specific guidelines for the content itself – including added pieces such as a CPR mask and burn supplies – as well as the label adhered to the outside of the kit, which includes a disclaimer that the ANSI standards are met so long as the first aid kit is kept at the minimum fill. There are also two classifications of first aid kits to determine what content is needed amongst various industries. The first is Class A, which would be for a general workplace environment where basic and common injuries may occur, such as a call center. The second is Class B, which would be suitable for anywhere that may allow for more than basic injuries, such as a metal fabrication facility – this kit or first aid cabinet will have two components that the other does not: a splint and tourniquet, as well as greater quantities of other required first aid supply items. These standards not only require kit containers to pass a 3-foot drop test and state what content should be included within, but also set forth performance specifications in regard to the pieces individually – such as the minimum size of eye wash, active ingredient within hand sanitizer, or cutting capability of scissors.  In addition to the required first aid kit fill, the newest ANSI standards also name “Supplemental First Aid Supplies for Consideration”, meaning items that one may want to consider having on hand depending on industry but are not required within the guidelines and may not fit into the kit itself – such as a hemostatic agent or electrolyte tablets. 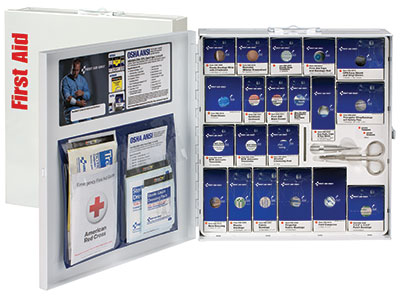 In short, ANSI is a group of selected personnel that discuss and introduce voluntary guidelines to be followed, while OSHA is the governing body that sets regulations to be adhered to by law. As ANSI standards change, OSHA regulations may as well - but not always simultaneously. At present, the new ANSI standards take effect in June 2016 but there have not been new OSHA regulations released requiring one to have a 2015 ANSI compliant first aid kit or cabinet. Until then, it is certainly recommended to have a first aid kit meeting the newest standards – or to upgrade your current first aid kit if it was purchased in the last seven (7) years – as it is likely only time until they will become mandatory.  As they have for years, ANSI and OSHA will continue to work alongside one another with the intention of encouraging and enforcing quality and safety measures within workplaces. As stated in a letter of understanding between the two, “ANSI will furnish assistance and support and continue to encourage the development of national consensus standards for occupational safety and health issues for the use of OSHA and others”. Be sure to see our OSHA & ANSI SmartCompliance™ first aid kits and Refill Program
Categories: First Aid Articles
Tags: ANSI, ANSI Z308, ANSI Z308.1 ANSI 2014, ANSI 2015, ANSI 2016, ANSI first aid, ANSI first aid kit & ANSI Minimum REquirements
Posted By: First Aid Mart Team